On July 4th, 2008, I was contacted by the Obama team’s Andrew Bleeker. “Love your work… How about changing the world?” …Absolutely!

The first set of banners I created raised the click-through rate on image ads by 33% and donations from image ads rose by 20%. The creative that followed led to another 3% increase in donation rates. According to the campaign, my 2012 creative outperformed all other banners in the same verticals. Read more ▾ 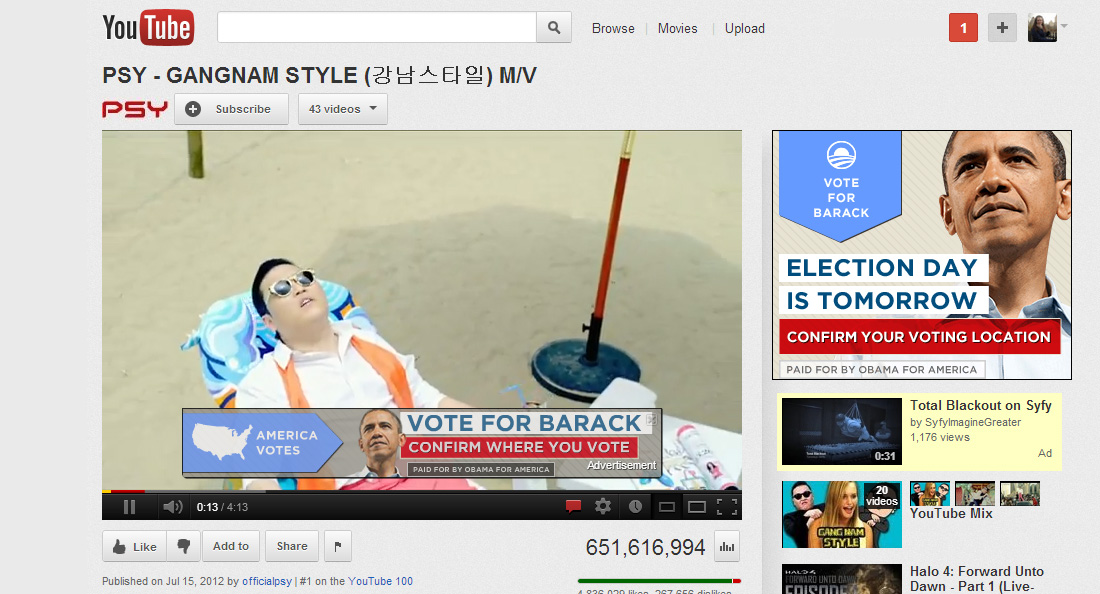 All the national campaign banners I designed appeared on well-trafficked sites such as CNN, The Washington Post, AOL, The New York Times, Newsweek, Politico, The Huffington Post, Dealbook, and in mobile apps like Words with Friends, Pandora, BET and Time Warner Cable. Wallpapers and pushdown ads took over screens in battle ground states like NV, Ohio, Florida, Virginia and Wisconsin. The campaign bought ad space on pretty much every major site leading up to the election, and many minor ones. These ads even appeared on The Game of Thrones Wiki. They were seen by millions, if not Gorillions, of people daily.

Whether they’ve been banners for local fish stores, Fortune 500 companies, homemakers selling homemade cigars, Honda selling Civics, or a zillion other types of products, it never occurred to me that making web ads could help sell a president to the United States… yet here we are.

Working for both the 2008 and 2012 campaigns made me feel like Mr. Awesome on Awesome Street on a rainy day of Awesomeness. My creative work helped get (a classified yet insanely high number) of Americans to register to vote through the site.

I worked under the best creative conditions possible. It was a perfectly-defined (yet malleable) brand, and my direct contacts were open-minded and fast with feedback. It was an honor to work with great people from Obama for America in 2008 and Bully Pulpit in 2012.

The 2012 campaign was much different than the 2008 campaign in numbers alone, including far more creative output. In 2008, there was only one series of banners that focused on state-by-state placement and very little message testing. In 2012, the Obama digital marketing team conducted heavy testing on both message and images, and general ads were widely integrated in battleground states.

The campaign didn’t even blink when I told them about the lunchbox concept but the sandwich that appears on some of the sizes raised eyebrows… “Let’s give it a shot. Just make sure its a very American sandwich.” Be sure to roll over most of the banners to catch some fun interactivity. A Voting Sandwich, Obama Icon Alarm Clock, Timers, a plate full of an Obama Logo being eaten, exploding stars and more.

I got this email from Sarah Eva Monroe, Senior Advertising Strategist at Obama for America on the subject:

“It is universally agreed that the rollover effect on your units is the most satisfying ever designed. Love it! Someone said it was so calming that it was like using a stress ball.”

Click the banner ad thumbnails below to see more details about the 2008 Barack Obama campaign from my original 2008 website: